The brief for “Everyware” is entitled “The Matter of the Immaterial”, and is focused around ubiquitous computing and making the intangible tangible. I took this idea and used it as a starting point for some research into what is already available. 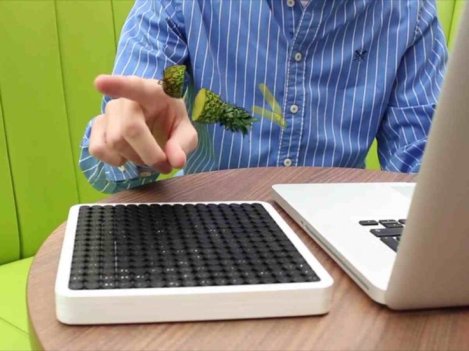 Ultrahaptics is a startup company focused on making the virtual world physical. Using an array of ultrasonic projectors and hand tracking, users can feel & interact with virtual environments, as well as feel real tactile feedback without the need for wearing or holding special equipment. (Ultrahaptics, 2017) Read more on my other blog post.

Ultrahaptics follows a similar concept to the Geomagic Touch X 3D pen (Previously known as Sensable Phantom Desktop), which I have used!

The Daisy Pi is a Raspberry Pi powered home monitoring system. It is fitted with multiple sensors including temperature, light intensity and humidity. It is also capable of capturing audio and video feeds, which can be accessed remotely by devices such as mobile phones or tablets. (Lopez, 2017)

Moon is an interactive installation piece created by Olafur Eliasson and Ai Weiwei. It invites viewers from around the globe to draw and explore a digital “Moonscape”. (Feinstein, 2014)

Eliasson and Weiwei’s work is focused around community and the link between the online and offline world. (Austen, 2013)

Over the course of its 4 years of existence, Moon grew from simple doodles and drawings, to collaborations & clusters of work, such as the “Moon Elisa”, where multiple users came together to recreate the classic Mona Lisa painting. (Cembalest, 2013)

“The moon is interesting because it’s a not yet habitable space so it’s a fantastic place to put your dreams.” – Olafur Eliasson, on Moon (Feinstein, 2014)

Illuminating Clay is a platform for exploring 3D spatial models. Users can manipulate the clay into different shapes (even adding other objects), and using a laser scanner and projector, a height map is projected back onto the surface. It can also be used to work out data such as travel times and land erosion.  (Piper et al., 2002) 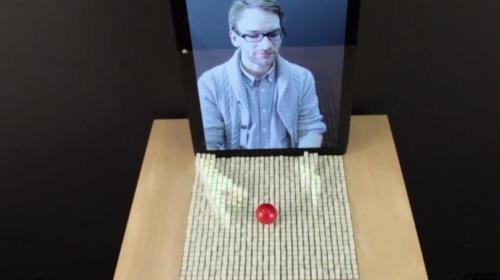 Physical Telepresence is a work created by students at MIT, based around shared workspaces and remote manipulation of physical objects. (Leithinger et al., 2014) The work consists of a pin-based surface that can be used to interact with physical objects. (Pick, 2015)

Near Field Creatures is a game made by students as a part of the mubaloo annual appathon at Bristol Uni. Users scan NFC tags (such as in certain student cards) and collect different animals of differing values. These collected animals can then be used to compete with other users. (Mubaloo, 2015)
Pico
Pico is an interactive work that explores human-computer interaction, allowing people and computers to collaborate in physical space. Pico is interacted with by use of pucks, which can be used by both the computer and the user. (Patten, Alonso and Ishii, 2005)