“The science of anthropogeography, or more properly speaking, psychogeography, deals with the influence of geographical environment on the human mind.”

Psychogeography is based around identifying the ambiance and general feelings associated with a place. The aim is to divide city zones into ‘distinct psychic atmospheres’; Creating an illustration of a city not based upon topography, but instead based around the feelings created in certain areas, and how they link together.

Our inspiration today is based around the work of Guy Debord, an example of which is below. The arrows represent unity; a connection between areas based on psychological aspects; these are known as ‘Slopes’. The size of the arrow corresponds to the strength or length of a slope.

Our work was also inspired by Mark Shepherd’s ‘Serendipitor’; an app that leads you from point A to point B using roads not yet walked (Similar: Drift), as well as Susan Philipsz’ installation ‘Surround Me’, which uses sound as a medium to reflect the atmosphere of areas of London.

To start our journey, we placed a cup on a map to mark out a general area for exploration. This is not a limitation; it is merely a guideline for our path.

Our journey starts on the outskirts of the university, near Drake’s reservoir, a place where work and rest collides. There is a sense of calm; a juxtaposition between the busy streets and the university campus.

The train station and surrounding main roads have an overall sense of restlessness; it is an area of transportation that never sleeps. 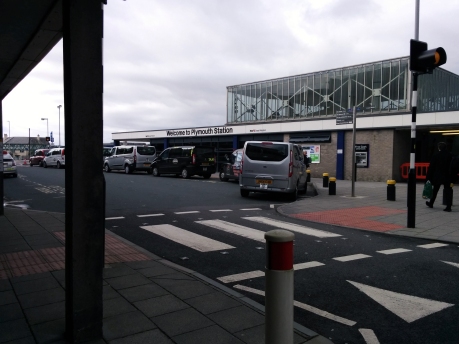 In stark contrast to the city centre, these cramped flats almost give a sense of suffocation. The atmosphere is quiet, almost depressing in nature.

An area of transition; watched over by CCTV. An Archway leading you away from residential to commercial, a gradual transition dusted with grassy banks.

Another transition; this time from the city centre near the hoe toward a quieter area. Although the churches may represent a sense of community to some, the dark cobbled alleyways may represent a feeling of nothingness, possibly even unease in others.

Lastly, we return to the University’s Roland Levinsky building; a modern, angular building with a strong presence. The shape of the stairway and surrounding walls naturally leads you toward the entrance, not dissimilar to a funnel. Although fitting with the architecture of the nearby shopping centre; the feeling is overall different.

This is a rough map of our actual journey, and a psychogeographical map based on our own experiences. 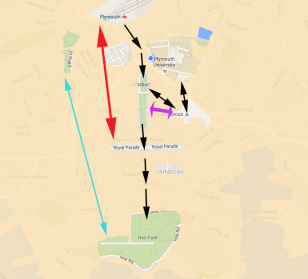